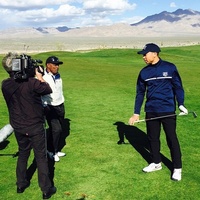 Uh Oh! James is not taking on new students.

Where Is My Lesson?

James can work with you at the following location.

The more lessons you buy the more you save!

Book your lessons online or give us a call at 301.500.2516 and we will help you select your perfect instructor.

Upon payment you will immediately receive your instructor's contact information. They will be in touch within 24 hours to schedule your first lesson at a time and location that’s convenient for you.
/golf-pros/sacramento-ca/21775/

A former Division I collegiate golfer and recent inductee to the African American Golfers Hall of Fame, Collegiate Division, James W. Reede, III has been an instructor in the game of golf since 2012. Over his career, he has earned a reputation for making the mechanics of the golf swing easy to understand and fun to implement for golfers of all ages and abilities. Reede was introduced to the game of golf at age four, won his first tournament at ten, and was ranked among the Top golfers in California by winning the Western States Jr Golf Championship by 4 shots in his senior year of high school. He competed on his high school golf team earning all-conference honors all four years. He continued his golf career as a Tiger at Jackson State University, where he served as Captain. Reede trained under PGA Class A Professionals and mental coaches Eddie Payton, Matt Holmes and Clifford Cheathon, whose tutelage furthered his understanding of the game both as a player and as an instructor.

"Don’t waste your time and money trying to track down a qualified golf instructor. We’ve done the hard work for you and filtered out the best golf instructors in your area using reviews from people just like you"

Do You Have Any Questions?

Can I book a trial lesson with you?
Most people purchase a minimum of 6 hours to start so I have enough time to look at your game and make a few quick fixes or develop a plan based on your goals. If for some reason you aren’t happy, PlayYourCourse can switch you to a different coach. If they can’t find a coach you like, they will refund you the remaining lessons. But if you would still like a trial lesson you can call 301.500.2516 to set one up.
How can I contact you?
Once you have booked your lesson package, you will immediately receive my contact information. If I don't hear from you, I will call you to finalize your lesson details. You will also receive an email with all of my contact information after you book.
Can you teach more than one person at a time?
Yes, I offer semi­private lessons for up to five students at once. Each additional player is only an extra $30.00 per hour.
Do you offer group lessons?
Not at this time, but private lessons are a great way to learn the basics so you can develop the proper technique and excel faster. However, you can always bring your friends! Each additional student is only $30.00 extra.
When can I start?
As soon as you’d like!
What if it rains?
If it rains we'll reschedule for a sunny day! It won’t be counted as one of your lesson credits.
How do I schedule and pay for my lesson?
You can book directly through the website or feel free to call at 301.500.2516.
Questions? Need Help?
Contact Us
Call Us:   301.500.2516